San Giovanni Rotondo, the Shrine of St. Pio of Pietrelcina, and where his body lays

seen in apparition, or who had the “odor of sanctity.” There are saints who could understand languages they didn’t know. But Padre Pio of Pietrelcina, who died on September 23, 1968, had all these charisms, and more. In fact, not since St. Francis of Assisi has there been such a miracle-worker.

It is impossible to do justice to the entire array of miracles worked by Padre Pio. They are endless, and they have transcended his death. Which is evidence of the love and dedication that pilgrims have for this Saint. 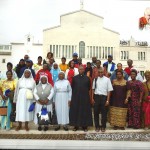